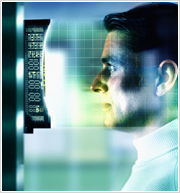 The human face plays an important role in our social interaction, conveying people’s identity. Using the human face as a key to security, biometric face recognition technology has received significant attention in the past several years due to its potential for a wide variety of applications in both law enforcement and non-law enforcement.

As compared with other biometrics systems using fingerprint/palmprint and iris, face recognition has distinct advantages because of its non-contact process. Face images can be captured from a distance without touching the person being identified, and the identification does not require interacting with the person. In addition, face recognition serves the crime deterrent purpose because face images that have been recorded and archived can later help identify a person.

NEC’s face recognition technology can be implemented as a functionally independent application, or seamlessly integrated into new or existing biometric security solutions by system integrators and solution providers.